Brave, strong, and reliable, the Commission of Indio spirits (the Indio mysteries comprised of the Indio Court and the Indio Division) are near central to the Puerto-Rican lineage of Vodou or Sanse. The influence of the Indios is what makes Puerto-Rican Vodou as much as the Petro Loa make Haitian Vodou. 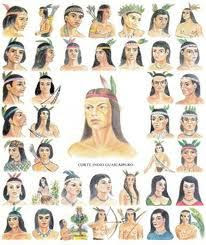 For clarification purposes, the Commission or Court of the Indio Spirits is different than the Indio Division. Sanse or Puerto-Rican Vodou is the 7 Chief Loa or Mysteries and the 21 Commissions or Courts of Spirits. The Indio Division is on the of the 7 Divisions headed by Tinjo Alawe, one of the 7 Chief Loa or Mysteries. Tinjo Alawe is a Loa who is not of African origin, but instead Taino and Arawak native peoples. The Loa of the Indio Divison also are mostly not of African descent, and likely include the Cemi, great supernatural beings of Taino and Arawak veneration.

The Commission or Court of the Indios is part of the 21 Commissions of Spirits. These are spirits of the human dead who were native to the land they lived and died. Native Americans, native South Americans (Caboclos of Brazilian Umbanda), and Islander peoples. Obviously the Taino, Arawak, and Carribean people of Cuba, the island of Hispanola and Puerto-Rico. It would also include native peoples of any land you live on, also entailing ancient native Europeans, depending on where you live.

There is even a more profound mystery surrounding this situation. However, that is for the members of my Temple. For this posting, I will focus on the importance of the Indio Commission of spirits in respects to the cosmology of Puerto-Rican Vodou or Sanse. Cosmologically speaking, the break down of New World Vodou (Haitian, Dominican, and Puerto-Rican) begins with God. God is the Supreme Creator and to whom are attributed the titles Papa Buen Dios and Bondye.

As far as we know, the next rung down from God (at least where humans are concerned) are three cosmic Loa. Gran Solier, Gran Toro Sentao, and Gran Simbi Rey del Aqua. These three Loa has various dominions over the Solar energies and raw forces, which are prime motivators-drivers on earth. These Loa never directly interfere with human affairs but instead, send emissaries on their behalf to mount humans and teach what is ready to be known about them. These three cosmic Loa each oversee a particular branch of New World Vodou, Gran Solier over Dominican, Gran Toro Sentao over Haitian, and Gran Simbi Rey del Agua over Puerto-Rican.

The Taino people's native religion and spiritual hierarchy have as it's king or great Sky Father, their principle Cemi (Gods and Divine Ancestors) known as Yocahu. Yocahu is Gran Simbi Rey del Aqua. For this reason, the Court of the Indios and their spiritual mysteries are central to the tradition of Sanse. Gran Simbi Rey del Aqua means "The Grand Simbi who reigns/is King of the Cosmic Waters." This is yet another essential function of Sanse or Puerto-Rican Vodou. One of the Christian images used for Gran Simbi Rey del Aqua (sometimes also known as King Molinu) is Jesus after being baptized by John the Baptist (the Commission of the Johns/Juans and Marias are paramount to the crowned Priest/Priestess or Sancista). The importance of water within Sanse, in both it's metaphysical and physical state, cannot be overstated.

An initiate is brought to the river, the domain of the Indio spirits. In the presence of Gran Simbi Rey del Agua, and under the authority of Tinjo Alawe and another powerful initiatory Loa named "King of the Sweet Waters," he or she receives baptism. Water for the transference of spiritual energy continues past initiation. Sanse makes heavy use of prepared baths and washes. Water molecules are subject to transformation via vibration, changing the nature of the water to fit the desire of the medium or Sancista. Magnetized and charged waters to heal the sick and promote better overall wellbeing have long been associated with Mesmerism and Alan Kardec Spiritism. Kardec Spiritism is a foundation of Sanse, and so this tradition lives on in both Puerto-Rican Vodou and Espiritismo. 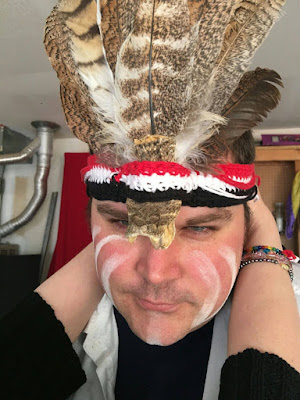 n my Temple, mediums will get mounted" by a spirit and then prepare spiritual washes per the needs of the attendees. The wash is made using the available waters, perfumes, lotions, and alcohols on the altar table. Prayers are spoken over the prepared water, and spiritual hand passes made over the water. The attendees are then washed by their needs and under the direction of the officiating spirit.

The Indio Division and Commission are said to be that of water, which we have discussed, but also air. Of equal importance as water to the mysteries of the Indios and thereby Puerto-Rican Vodou or Sanse, is the messenger and intermediary spirt, Tobacco. The Taino people venerated the messenger spirit Tobaku (where we get the word Tobacco from). They asked Tobaku to lift their songs and prayer Yocahu (Gran Simbi Rey del Aqua) with the smoke. Smoke is the spirit of Tobaku released from his physical body of dried leaves by fire, a sacrifice mystery. Many of the Indio Loa and members of the Indio court of spirits have connections to the dominions of air, wind, Tobacco, and water.

Puerto-Rican Vodou temples would do well to offer regular gratitude and reverence to the Indios and their mysteries. Or else they can find themselves lacking in necessary spiritual supports.

The Commission of Indios is renown for its warriors, healers, medicine workers, and chiefs/chieftess. They are empowered by their native soil and followed by legions of animal and plant spirits. Indios are called to lift hexes, defeat black magic, subdue adversaries, break evil's hold, and navigate tricky obstacles. Like the 7 Chief Loa of Sanse with their Divisions of Loa, there is a form of Indio spiritism, a tremendous stand-alone tradition by itself, which I have inherited. There are 7 lines or categories of Indio spirits within the Court of the Indios, who are called to work.

Each line comprises multitudes of Indio spirits and is headed by a Chief. The names of these Chiefs are secret to tradition I inherited and may or may not be the same for other lineages of Indio Spiritism. Due to secrecy and general rarity of the practice, it is likely I will never know. Indio spiritism is often called "Indio Cordon."

A cordon is a "circling," like how they say "circle the wagons." It is a defensive formation. Through the Indio Cordon, the medium or Sancista asks for the Court of the Indio spirits to surround within 7 defensive circles. During an Indio Cordon, ample amounts of Tobacco, water, and alcohol are offered to the spirits and then utilized for cleansings and purifications. An atmosphere of welcomed mounting is cultivated, and the Indio spirits will often provide excellent advice during consultations. It is a beautiful and uplifting experience.

An active Sanse temple ought to be holding an Indio Cordon once every three months. More if the Temple is new or engaged in spiritual deliverance.

I perform an Indio Cordon weekly for myself and my Temple, here is why. As I was first developing my tradition of Indio Spiritism, unbeknownst to me, some petty people were spreading lies about me. Their lives turned to shit. They ran to Paleros and Babalawos, begging for protection against the black magic I was supposedly throwing at them. One of those nitwits Doxxed me on Reddit and posted old some addresses I once lived. A Redditor came looking for me at one of the addresses. Whoever lived there knocked the absolute snot out of them (they were lucky I would have done worse). I am uncertain if it is sad or funny, but I didn't discover any of it until more than a year after.

Was I sending black magic at them? No, none at all. I was, however, establishing a solid connection with the Court of Indio spirits and developing a highly effective spiritual practice. Sanse or Puerto-Rican Vodou doesn't attack people. I invite these spanked and schooled fools to meditate on the mystery of the Rose and the Thorn. The thorns do not offensively attack. They injure only with the exact measure of force they where grabbed. Want the pain to stop? Let go. Those morons did it all to themselves. The Indio Cordon is the exact same. I ask that all who seek to injure, slander, or send evil at me and my Temple discover we are protected by the marvelous Court of the Indios spirits. That their lives be ruined until they stop attempting to do harm. Indio Spiritualism and Sanse is a religion which is like a thorny rose. Beautiful, desired, and offering formidable protection, which clearly defines your enemies as the aggressors.

The Court of the Indio spirits is served with blue, green, and yellow. They enjoy Tobacco, water, red wine, and cornmeal. You may offer them cooked yams, squash, and bread.

Offer the Prayer of the Indian Chief and get very still. The Court of the Indios spirits talks through the wind, the rustling of leaves and plants, through bird songs and flowing water. The stiller and quieter you can become, the better.

Prayer to the Indian Chief

Oh, Great Chief, faithful Indian Spirit. In the name of the Father, the Son, and the Holy Ghost, I, a faithful believer in your power, ask you at this moment to help me. Oh, Great Spirit, you know my problems. Help me with your power and guide me with your holy and divine protection. Oh, Great Indian Spirit, I ask you in the name of Jesus, offer me your protection, and with your ax break the chains that my enemies bind me with spiritually and in all money matters. With the poison of your arrows destroy the evil thoughts against me. With your eyes, see that no one does me harm in any way. Amen. Ayibobo.

The Sanse practiced at my Temple is advanced, becoming better and more refined. My Temple and I will continue to revere the Commission of Indio spirits, developing and progressing spiritually while offering prayers for the advancement of everyone else.  Interested in learning authentic Sanse, Puerto-Rican Voudou, and Indio Spiritism? Consider joining our Temple. 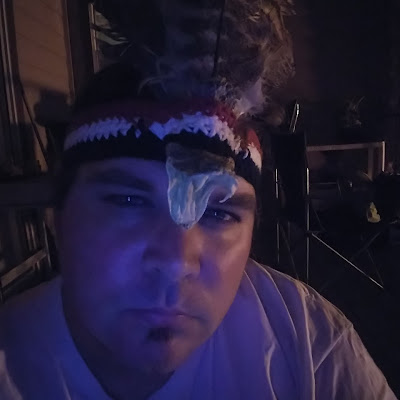 Papa Machete que ganas todas las Batalas is a world-renown circus trained Strongman, Occultist, Martial Artist, Remote-Viewer, Psychic Investigator, researcher, Voudou and Palo Mayombe Priest, author, activist, and adventurer. Spiritual Father of the Temple of the Machete Who wins all Battles, and offers services through his Online Shop. Papa Machete welcomes all people, of any race, gender, orientation, or ability. His only conditions are that you love God, love humanity, and are willing to stand for what is truly right, not just what is popular.